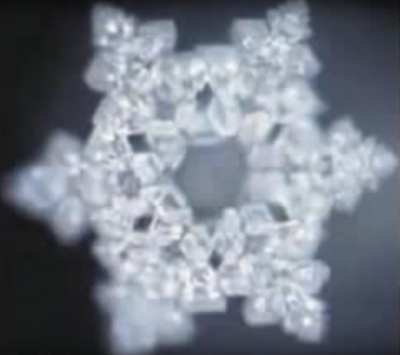 Have you ever experienced really strange coincidences, serendipities, or even so called „miracles“?

And do you „believe“ in phenomena, where there is no rational explanation for?

I do believe in such things and that they happen for a reason:

To help us and guide us and to open our minds for the amazing possibilites we are capable of.

I´d like to show you a beautiful example demonstrating this idea with ordinary water:

The japanese scientist Masaro Emoto, a Doctor of Alternative Medicine explored frozen water after it was exposed to different emotions.

Water from clear mountain springs and streams had beautifully formed crystalline structures, while the crystals of polluted or stagnant water were deformed and distorted.

Bespoken with the words „thank you“ , the frozen crystals had a similar shape to the crystals formed by water that had been exposed to Bach’s „Goldberg Variations“- music composed out of gratitude to the man it was named for.

You can see the pictures in this short video:

Having seen this, we can maybe start to be aware of the awesome power we possess, through choosing our thoughts and intentions, to heal ourselves and the earth.

Only as I did some research about Mr. Emoto, I found out, he had to face quite a lot of prejudices. He is often considered to be not a „real“ scientologist, and his work is lacking of proofs.

Maybe in our culture it is still a big step to allow yourself to think freely about such irrational things, without being judged as being esoteric and a bit craaaazy ;)

I personally agree with one of the comments made on the Emoto -Video:

„Even if you are skeptical, the imagery is an important reminder that our thoughts, actions, and even emotions do have a measurable effect on people around us. I think it is beautiful.“